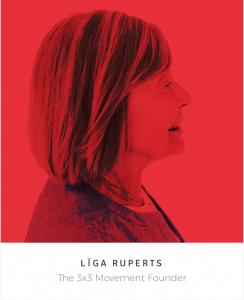 country?  Many of us probably do, because these days there are more displaced people

in the world than there have been at any other time.  I would like to share my story about

how after being forced to leave home, I found ways  to strengthen my ethnic identity and

connect to my roots.  I hope it will help others who find themselves far from home.

celebrate being with their family and their tribe – people who share their history,

language and traditions, songs and dances – a phenomenon.  A place where a teenager,

a 90 year old, a middle aged person and a toddler – all feel welcome, are listened to and

heard, know that they belong.  A place where they can learn about their ethnic heritage

and about each other.  There is such a place and we call it 3×3, symbolizing the three

generations.  In fact, I started the 3×3 camp movement which helped Latvians all over the

world to connect, affirm their ethnic identity and enjoy being together.

I was born in Latvia, a small country in northeastern Europe.  Along with my parents

and many others I fled the Soviet occupation in 1944, spent five years in refugee camps

in Germany and then emigrated to the US where I have spent most of my life.  However,

I am immensely grateful that I feel I belong here in Latvia as well.

Life in America was hard in the beginning.  We had lost everything, including our very

identities as the people we used to be.  My father had been an officer in the Latvian army,

but in the US he was a farm hand, whose wages barely bought the family groceries.  My

mother, who had been a clerk in a district court, became a maid on the farm.  I went to

school, but only because my parents insisted.  It was humiliating – I was placed in a grade

much below my age level, because I could not speak English.  We felt weird and inferior.

Life became easier after we moved to a city where a number of other Latvians had settled.

My parents had menial jobs, but I continued in school and eventually earned a Ph.D in

counseling.  Over time I held a number of great jobs as a teacher and a counselor.  I no

longer felt weird.  As a matter of fact, I was proud of being different, being unique.

Most of my friends were Latvian, but I had participated in few organized activities in the

Latvian community.  To tell the truth, I felt I did not quite belong there, like I wasn’t a

good enough Latvian by the standards of the older generation, because in many respects

my opinions differed from theirs.  Eventually I did find some ways I could contribute

by working in the summer high school and some youth seminars.  And then, much to my

surprise, I was elected to chair the Bureau of Culture of the American Latvian Association.

Now I had to do something, but had no idea what!

Rivers, Michigan.  A mother was berating her teenage daughter who apparently refused

to sing in in the choir.  Mom said that all good Latvians sang in the choir!  Really?  And

what made her so sure of that?  Her parents had said so.  Hmmmm…  And what was the

big deal about being a good Latvian anyway when you lived in America?

Although Latvians in the diaspora had a number of organizations and activities, I felt

that there was room for something new and different.  Not sure I was on the right track,

I interviewed a number of people in my age range, about 40-55 years old, and asked

about their experiences in the Latvian community, what they liked and disliked.  It turned

friendships with other Latvians.  We also shared the feeling that some of the activities

and some characteristics of Latvians as group in general discouraged our participation.

Living in the past, expecting everybody “to sing in the choir” – stick to a rather rigid

definition of what a good Latvian should be and do alienated us.  I wanted to do

something that I and, hopefully, others would truly enjoy, not participate in because we

felt we had to be “good” Latvians.

Such participation had a lot to offer.  All of us, especially people who have been forced out

of their homelands, are better off when they have a sense of connectedness,

values would help meet the need for belonging.  I was convinced that a strong sense of

development was compelling rather than prescribed.

situation – in brief, know more about the meaning of being a Latvian.  To know more

about each other – who we actually were, not who we should be to qualify.

I thought that in an informal, non-traditional, fun setting we could learn from and about

each other, regardless of age, educational level, profession or economic situation.

Participating in interactive educational and recreational activities hopefully would

Latvian child, parent or grandparent surrounded by a different language and culture.

Latvian community.  Share how you feel, what you do and how you do it, how you cope

with life in two different cultures and languages.  And hopefully discover what it is worth

The more I thought about it, the more carried away I became.  And you know what

happened?  My enthusiasm and belief in the project helped to connect with others  who

spread the idea further and offered suggestions.  In fact, many of them became involved

In the development of what we named the multigenerational ethnic heritage camp 3×3.

So what is 3×3? It is a week long camp where you can make a traditional Latvian ring or

necklace for your sweetheart, learn how many “dainas” or folksongs are dedicated to the

may last a lifetime, and much, much more.  It is where family members who live in

different countries can spend quality time together.  It is where you don’t have to worry

about cooking or cleaning house.  Your time is your own to enjoy the activities and each

other.  3×3 camp programs meet the needs of participants by providing a variety of

different ages.  In the evenings there are programs and activities for families, folk

singing and dancing, as well as time for socializing, playing cards and whatever else you

may like to do.  So children, their parents and grandparents, 3 generations, enjoy camp

While the organizers come from various backgrounds, the seminar presenters and

Craftsmen are mostly well known professionals in their fields, chosen not only for

Mastery of their subject but also the ability to present their material in an interesting,

Easily accessible manner – much like TED talks.  All work is done on a volunteer basis.

Latvians, and this provided an opportunity to travel and engage people in different

countries that had a sizeable Latvian population.  The 3×3 camp movement rapidly

spread from the US to other countries.  Our goals were learning about all things Latvian,

networks.  Many types of learning take place – not only about Latvian culture and

society but also about and from each other – and about ourselves.

What makes it a success

3×3 came about and flourished because it was conceived from the bottom, by asking

the experience meaningful to him- or herself.  It means different things to different

energy and joy of the dancers is undiminished.”  A 90 year old man from New York, who

has participated in camps in Latvia for many years, says that the people he has befriended

there are his family since he has none other.  I am sad that he will not be making the trip

this year.  Families often enthusiastically talk about how sharing  experiences at 3×3

has helped them communicate like never before.  Teenagers love being allowed to stay up

seminars the next day.  Many camp participants view 3×3 as the opportunity to “charge

Currently there are 8 3×3 camps each year – one in Australia in January, two in Latvia in

July, two in the US and one in Ireland in August, and two in Great Britain in July/August.

Michigan in 1981.  Although no two camps are exactly alike, all of them have the same

3×3 was started so we could learn more about our ethnic heritage and about each other.

People of different age groups and an understanding that all Latvians are not alike,

That they don’t all have to sing in the choir.  We can learn certain things from our elders,

but they have to learn from the younger generations what is important to them, how

being Latvian feels to them.  I strongly believe that unless there is an understanding

and acceptance of the ideas, goals and values of all age groups, it is impossible to build a

eventually shared by more and more people – we wanted to have a sense of belonging,  a

tribe, have fun, learn from and about each other without the barriers that age and

background often create.  An we found that there are many ways of being Latvian with or

without singing in the choir.

movement from its inception in 1981, and to continue to be the coordinator of camps in

three continents and six countries.  It’s great to see that many organizers and presenters

of today started their 3×3 experience in a baby carriage.  I am able to relate to them not as

a grandmother but a person with shared goals, values, and activities a colleague, an equal.

be a Latvian – and why it feels great to be one.

Do any of you know someone who has to live somewhere other than hia or her native country? Many of us probably do, because these days there are more displaced people in the world than there have been at any other time. I would like to share my story about how after being forced to leave home, I found ways to strengthen my ethnic identity and connect to my roots.